Benefits of a 6-Lug Floating Bolt 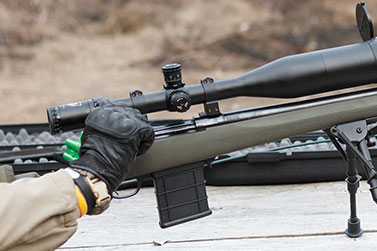 Benefits of a 6-Lug Floating Bolt

Every aspect of the Pristine Custom Bolt Action Receiver is designed with the shooter in mind– including our 6-lug floating bolt head – a design that is only made possible because of the advances in modern machining and manufacturing technology.

The rationale for Pristine’s 6-lug bolt head, which uses two rows of three locking lugs, ultimately comes down to the necessity of a light bolt lift combined with a smooth bolt throw.

WHY TWO ROWS OF THREE LUGS EACH?

We could use a single, internal lug on each side but then we would only have two lugs bearing the entire 50,000 PSI force generated by your cartridge.

During our early testing, we discovered the downside of a triple-lug bolt head (three rows of two or three lugs) is a heavier bolt lift resulting bolt lift.

A light bolt lift is difficult to achieve with a 60-degree bolt lift. We experimented with the roller wheel cocking piece to see if we could achieve the light bolt lift required but we could not achieve satisfactory results.

The firing pin spring must be reset regardless of whether it’s a 60- or 90-degree bolt lift.

While a lighter firing pin spring would make the bolt lift lighter the downside – inconsistent primer strikes – is completely unacceptable.

That’s why we kept a heavier firing pin spring – to ensure every firing pin strike fully ignites the primer. When the prime isn’t struck with sufficient force the primer’s ignition won’t be complete, and this impacts how fast your powder burns and differences in bullet speed.

Since Pristine’s primary goal is to manufacture the most reliable and consistent custom action on the market, we chose to go with the 90-degree bolt lift for a light bolt lift and a silky-smooth bolt slide while keeping the heavier firing pin spring.

The Roller wheel cocking piece is what makes this all possible. Browse to that blog post to learn more about this ingenious piece of engineering magic.

When a bolt with an integral bolt head is misaligned due to dust or other fouling of the bolt’s path, the bolt head will not line up correctly. In these cases, there is no way to correct this misalignment, leaving the bolt face ever-so-slightly out of alignment with the barrel. The tension and pressure on the locking lugs will also be uneven.

Pristine’s floating bolt head sits on a spring washer, which maintains tension while allowing the head to move slightly to ensure correct any alignment issues with the bolt head.

If the bolt shaft is slightly out of alignment for any reason, the floating bolt head ensures the bolt face always lines up correctly with the chamber and all six locking lugs are fully and evenly engaged.

The benefits of Pristine’s full diameter bolt are two-fold.

First, the entire bolt channel can be reamed in a single process with out the need to EDM two separate raceways to accommodate an oversize bolt head.

Second, a single bolt channel is faster to machine using the modern manufacturing processes that Pristine’s founders have excelled at for the past 23 years.

Tight tolerances mean the bolt cannot ‘wiggle’ in the bolt channel, one aspect of a smoother bolt throw.

This tumbling process means there is no ‘direction’ to the finish, unlike you’ll find with grinding or burnishing.

We experimented with electropolishing, electroplating and DLC but they didn’t give us the smooth, durable finish that we wanted.

Finally, the bolt is processed with liquid nitride to give the slickest and most durable finish – the final element in our silky-smooth bolt throw.

The Pristine Custom Bolt Action Receiver is the rock-solid foundation you need for your next (or first) precision rifle.